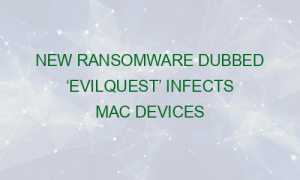 If you are the proud owner of a Mac, then you have probably heard of OR bought into the notion that ‘Macs aren’t susceptible to viruses or Malware’.

The truth is, whilst Macs have enjoyed a long-held reputation of a high security operating system, making them immune to most of the virus scares out there, this just is not the case anymore!

Apple does have an in-built security system, however, there are ways that the creators of these computer viruses have managed to infiltrate many Macs in recent times.

Owning a Mac makes you quite an attractive target, considering that Macs cost significantly more than most PC’s of similar capability, the prediction is that Mac-owners would tend to have a lot more to steal, and those seeking your personal information would thus have more to gain from you.

READ MORE:  How to Be Ready for an Emergency Power Cut at Home

Whilst a student owned Mac may not have anything of great importance to steal, a keen businessman running their livelihood from their laptop would be an enticing target.

News has come out recently about a new malware infection by the name of ‘EvilQuest’ which is a kind of ransomware. It has been found within the files of numerous pirated apps; however, it’s structure is such that it could be easily included in any app downloaded from outside of the app store. Please install externally-available apps with caution!

The malware is usually copied as code in the clean-up files which usually operate post-installation of an app to finalise it. Its action is then timed to give the user just enough of a gap between installation and computer infection, that they will not relate the new app installation to the recently acquired malware, usually leaving the Mac owner quite puzzled as to the origin of their infection.

The two symptoms of EvilQuest malware to keep an eye out for are as follows:

Unfortunately, the fact that this kind of infection can occur in Macs, highlights that there are in fact, gaps in the armour of the Apple internet security options and that Mac users may want to consider the use of additional antivirus and antimalware software.

READ MORE:  A Few of the Metaverse’s Most Significant Virtual Currencies

If you fall victim to this type of malware, it is not so simple as taking your Mac in for virus removal. There is no way currently to remove this infection from the Mac operating system and the only solution is to completely reformat the disk.

It is hence also, your best defence to ensure your data is safely backed up at regular intervals. So, if you face the need to reformat your device, you will not have the associated data losses.

What are Mobile Devices Compatible With Modern Slots?

What is Software Testing, and How Does it Work?

4 Reasons Why Custom Metal Art is Right For Your Home

How to pick Gold jewellery for daily use

Creative ways to use custom covers to transform your home decor