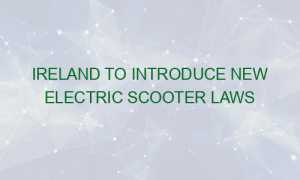 E-scooters and e-bikes will be legally approved by the government to be driven on Irish roads as per the Minister for Transport Eamon Ryan. The laws around e-scooters and e-bikes have been something of a legal grey area up to now. Hence, the government is drawing up new legislation around the new and increasingly popular mode of transportation. The legislation will introduce a new vehicle category known as “powered personal transporters” so that you can legally use your e-scooter in public provided the necessary safety standards are met.

The minister indicated that driving licenses, taxes, and insurance won’t be necessary to operate these vehicles on public roads. The legislation will be included in the Road Traffic Bill (Miscellaneous Provisions). The law will categorize e-bikes depending on their speed, size, and power. Although most e-bikes should be categorized in the bicycles category, the more powerful ones will be classified alongside light mopeds. My Ryan stated that e-scooters have become increasingly popular in a short period of time. But these vehicles are not legal under current Irish road traffic legislation. Hence, the government will be regulating the use of these vehicles so that you can use them more safely. You can read more about it here.

France and Denmark have already legalized the use of e-bikes on their roads and the planned legislation will bring Ireland in line with these European countries. The popularity of e-bikes with a growing number of metropolitan users is not surprising with the many benefits of these vehicles. In fact, e-bikes are convenient, affordable, and eco-friendly. But it remains unclear when the legislation will come into effect in Ireland.

Dott – a Dutch e-scooter company – operates in more than 16 cities around the world. The company has urged the Dutch government to consider legalizing the mode of transport to make it safer for their customers. They have recommended that the minimum age for the operation of an e-scooter be set to 16 years and to make helmets compulsory for 16 to 18 year olds. The recommendations also include a speed limit of 25km/h and a total ban on footpath use. Companies that provide rental services should offer a comprehensive insurance package to their clients.

In fact, Dott and a host of other e-scooter rental companies are eagerly awaiting the legalization of e-bike transportation in Ireland. The regulations will help the companies to compete on an even playing field in addition to improving the safety of their products.

The e-scooter and e-bike business is booming at present. Proper regulation of the industry will help bridge the gap between the demand for the vehicles and the legal framework around them. In fact, Halford’s store reported a 700% increase in e-scooter sales last October.

What are Mobile Devices Compatible With Modern Slots?

What is Software Testing, and How Does it Work?

4 Reasons Why Custom Metal Art is Right For Your Home

How to pick Gold jewellery for daily use

Creative ways to use custom covers to transform your home decor